Another stunning series of photographs by legendary photographer, Hans Feurer, captured aboard The Avalon, Captain Peter Bristow at the helm.  I’m guessing this fish weighs in somewhere around 600-700lbs, more or less.

FRAME 2: Reaching for the wire…

FRAME 3: Same day but a different fish, smaller, perhaps 400-500lbs, but similar action.  I’ve got the wire…holding steady with my left hand with a couple, three wraps in my right.  The bait fish is visible off the head of the big fish.  As we will see, the hook is firmly in place.

FRAME 4:  The big fish is turning a bit, the bait still visible at its lower jaw.

FRAME 5:  Moments later, the marlin has come around and I’m grabbing wire by the fistfull.

FRAME 6:  What’s left of the baitfish (head only) can be clearly seen, as can the 12/0 hook planted firmly in the lower jaw of the Black Marlin.  In the lower left of frame, the white tag pole is plunging a tag into the big fish.

FRAME 8:  Up close and personal! 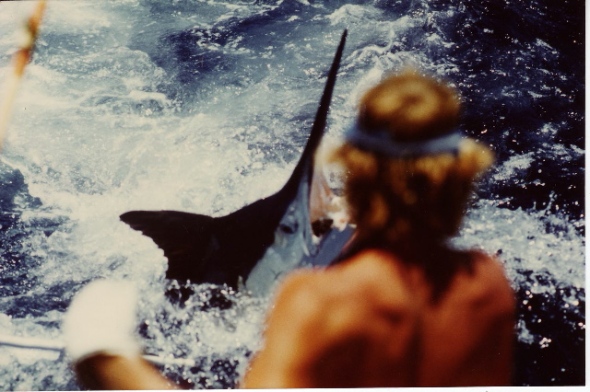 FRAME 9: One last look.  Still hanging on, waiting for the wire to be cut…so much for that!

This rare sequence of photographs by legendary Swiss photographer Hans Feurer captures an unusual moment in the world of big game marlin fishing – breaking wire on a black marlin.  The year is 1979, The action takes places aboard the Avalon, owned and skippered by Peter Bristow.  The location is somewhere on the Australian Great Barrier Reef.  Hans had contacted Captain Peter Bristow indicating his love of the big fish and requesting that he be given permission to ride along and take photographs of the action. Permission was granted and Hans spent two weeks with us documenting the experience of living, diving, fishing, eating, drinking and partying on the GBR.  What a pleasure to have Hans on board!  Good times, for sure!  The ‘wireman’ (me!) wears the blue visor, the 2nd mate, ‘Woodduck’, holds the tag stick used to implant a research tag in the fish before release.

FRAME 1:  An unusually calm day on the reef.  For those unclear about the particulars of this type of fishing, the tackle is 130lb test with a 30′ wire leader attached by swivel to the end of the line.  At the end of the wire is, of course, the hook attached to the bait fish.  In this frame the fish (approx. 300-400lbs) is about as ‘green’ as green gets, and has been brought to the boat quite quickly by the angler, the swivel reeled up to the rod tip and I have already taken some good ‘wraps’ on the wire.  The rod tip is low, as it should be, resting at my shoulder, and I have myself braced against the transom of the Avalon.  Note the red handled wire cutters tucked into Woodduck’s speedos, used to cut the wire after the tag is in place.  Follow the action and you will see that on this particular occasion he will not need them… 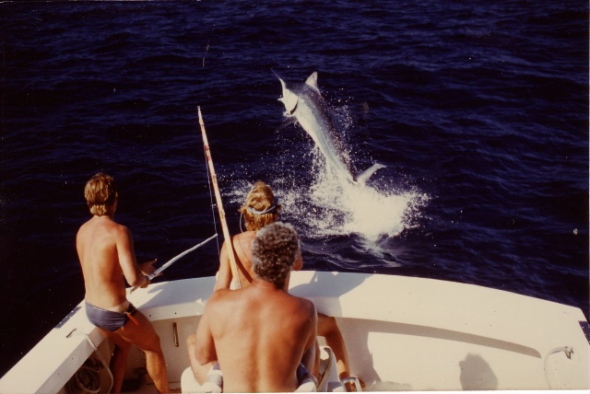 FRAME 2:  The fish is airborne – much of the wire is still just underneath the surface of the water…but not for long!

FRAME 3:  The fish has continued its explosive jump.  Woodduck is signaling Capt. Bristow to halt any forward movement of the boat but it’s too late – the wire has snapped and the fish has broken free.  Breaking wire on a fish is not the ideal situation but it sometimes happens on smaller fish like this one.

FRAME 4:  My expression is one of real pain because the wire has snapped back and nailed me in the face – not fun.  Zoom in and you can see it curled and hanging off my shoulders, trailing off behind me. Another great day of fishing on the GBR!

FRAME 5:  The letter from Hans that was included with the photographs. 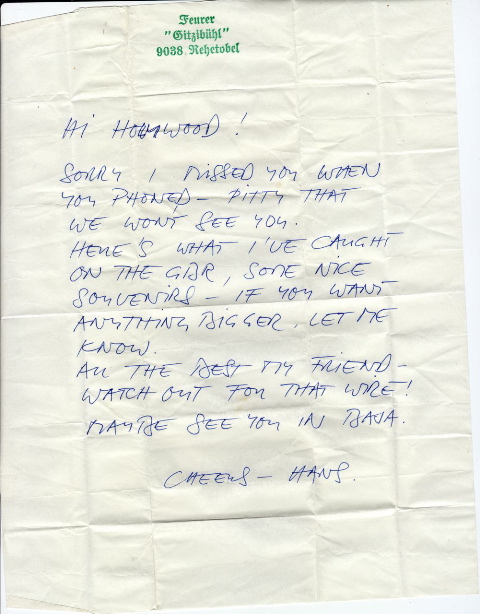 These incredible images are from my pal John Harding and were taken off the Great Barrie Reef, Australia in 1975 aboard The Avalon with Captain Peter Bristow.  The footage of the Black Marlin was shot on 16mm film for use in the film Islands In The Stream, based on a Hemmingway novel.  Check it out:

A giant Black Marlin lit-up and in full flight.  This fish is approx. 800 pounds.  It was tagged and released.  The fishing line is visible cutting through the water at lower right.  Not a spectacular photo in terms of acrobatics, but it shows the prowess of a big fish.

This is life on the GBR in a nutshell.  Clients fly in via seaplane, landing in the relative calm of the waters immediately inside one of the long ribbons of the barrier reef.  The larger of the vessels is the ‘mothership’, behind that is the game boat followed by the ‘painter’, or dingy.  Typically ,clients spend four days to two weeks living on the reef.  Captain and crew live on the mothership for the entire fishing season. 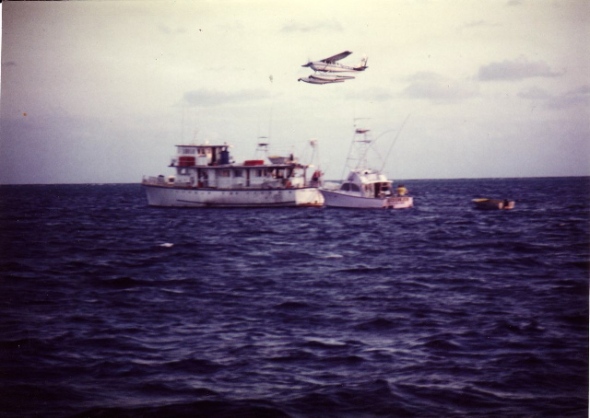 Chasing down a Black Marlin.  The long white stick is used to insert a research tag in the fish before release.  Yours truly to the right of frame.  Angler is Rupert Murdoch. Photo by Peter Bristow.

Having spent many a day and night hanging out with Rupert on the sea and sun drenched GBR, I can say he is possessed with a keen mind and a quick wit.  Always the gentleman, an overall great guy and a determined fisherman!  Photo by Doug Lewis

The author as a young fisherman… 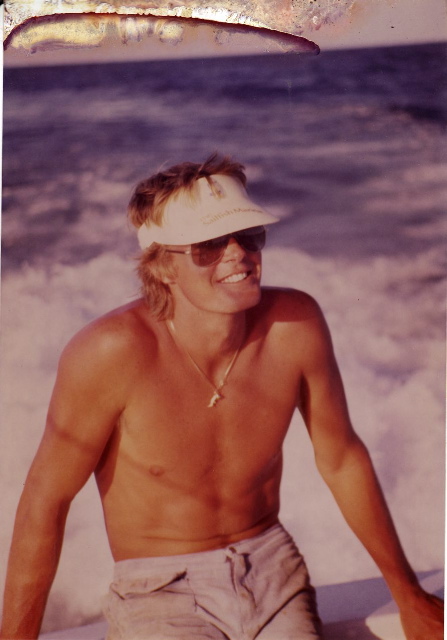 Late afternoon cruising the outer edge of the reef.  Lizard Island in the background.

Me and Captain Bristow… 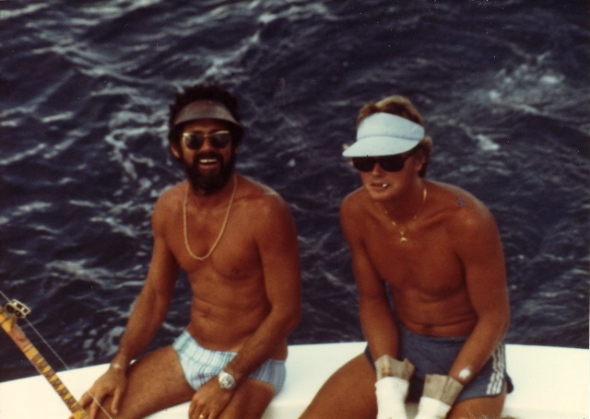 A lighter moment on the GBR…

Peter with daughter on board.

I had the amazing experience to live and work as a fisherman on the Great Barrier Reef for several years during the late 70’s – early 80’s.  I grew up working on fishing boats out of Kona, Hawaii.  Big Blue Marlin was the draw, and the deep, mostly calm blue water off the Kona Coast is one of the few places on the map one goes for the Blue Marlin experience.   But to those in the know, the pinnacle big-game fishing experience is ‘down under’, off the Great Barrier Reef of Australia’s Queensland coast and the wind-blown Coral Sea.

For those big-game fisherman who can afford it, the ultimate  big-fish experience is to travel to the Great Barrier Reef to spend 1-2 weeks fishing for Giant Black Marlin.  Whereas one might see a 1000+ pound Blue Marlin once or twice a year off the Kona Coast, that could easily be a daily occurrence on the GBR.  In the same way anglers are drawn to the GBR for the big Blacks, it is also the ultimate big-game fishing experience for those Captains and crew members of game-fishing boats the world over.  To fish a season – mid-Sept through mid-Dec – on the GBR fishing for Giant Black Marlin is the ultimate proving ground.

My first Marlin experience was from the back deck of the Valkyrie II, skippered by Fred Erickson, from that original generation of skippers along with Henry Chee, Rope Nelson, George Parker,  among others, which preceded the generation helmed by Peter Wright, Bobby Brown, Willie Erickson, Butch Chee, Bart Miller, Peter Hoogs, etc. I was in awe of these guys…going on board the Malia or the Blue Hawaii for the first time was a big deal. Fred was the father of Wille who had married my sister, Michelle. Wille went on to skipper the Hale Akaine and then the Finest Kind, a 37′ Merritt, at that time the third Merritt in Kona waters, behind the Black Bart and the No Problem.

Before I got into fishing, I was a crew aboard the TSMV Jeannie Marie, which, along with the Capt. Cook, took tourists en mass from Kailua pier on a leisurely motor down the coast to Kealakekua Bay, at which point we would load thirty or so guests at a time aboard a glass-bottom boat on permanent tether in the bay.  It was a great crew and a great time aboard the Jeannie Marie.  I was the only (and first) Haole to work on the boat. The Captain was Henry Akuna, 2nd mate was Gilbert Gaspar (now a police officer in Kona), and the two other crew were two Hawaiians named Jack and Jake. Jack was older, heaver set, friendly and smiling all the time. Jake was tall and slim, much young than Jack but much older than me. Gilbert got me the job…we lived together for several years at Michelle and Wille’s house in Kona Heights. Gilbert was also a Karate black belt, and it was he who got me into the discipline of self-defense.  So, after motoring a ways into the bay, me and the other crew would jump over the side with a handful of bread and dive down below the glass to feed the fish for the tourists looking down from above. At 15 years old, I got pretty good at getting down and staying down, but nothing like Jake and Jack, but especially Jack. He would often go down to seventy-eighty feet and hang out there.  At my best I was good for maybe 2+ minutes underwater whereas Jack could stay down for 4 minutes, no problem.  All in all, growing up on the Kona Coast was a pretty magical experience.

So, one day after a long day fishing I was at Huggos having a beer with the boys when Peter B. Wright flat out asked me when I was going to do a season on the GBR.  He added, “you ought to go, it’ll make a man out of you”.  There’s no shame in knowing when someone is right, so I said I was interested and Peter gave me the number of a captain in Cairns who was looking for a crew for the season. At that time, only a handful of Kona crew had made the journey, including, of course, Peter Wright.  Others were Bart Miller, Jeff Fay, David Beaude and one or two others, not many.

I was not yet a Captain, and knowing I needed the experience, I kept the number and that Sunday I called long distance international to Captain Peter Bristow and explained the referral; we talked and after a few minutes he said to come on down and he’d try me out.  So I did.  Most game boats that fished the GBR were set up with a captain and two crew, one to ‘wire’ the fish and the other to either tag or gaff the fish.  Peter  was only interested in having one crew, so that’s the way we worked.  Back then Peter had a number of early season charters so we would fish around Dunk Island beginning in July/August then move up the reef to Lizard Island for August/September.  October, November and the first half of December was generally spent on the edge of the GBR, camped out on a mother ship. Here are some pics: 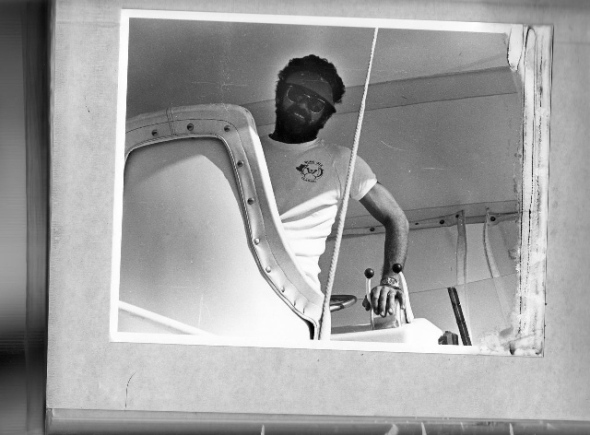 Bristow’s boat, The Avalon, in the bay at Lizard Island.

The Avalon, tethered to a ‘mother ship’, somewhere on the edge of the Great Barrier Reef.

In the bay at Lizard Island. 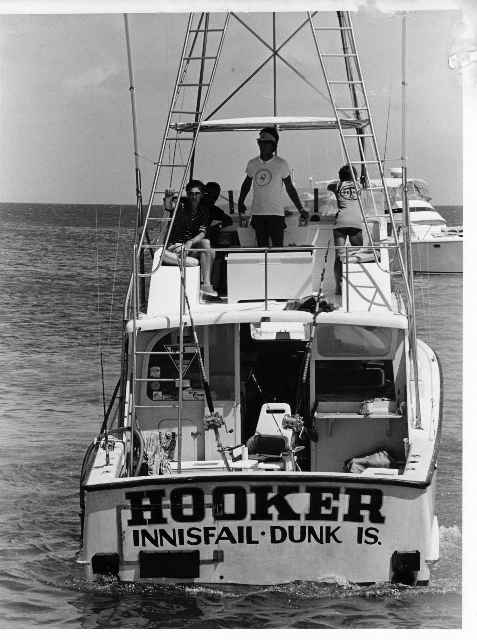 Jeff Fay on the deck of The Hooker 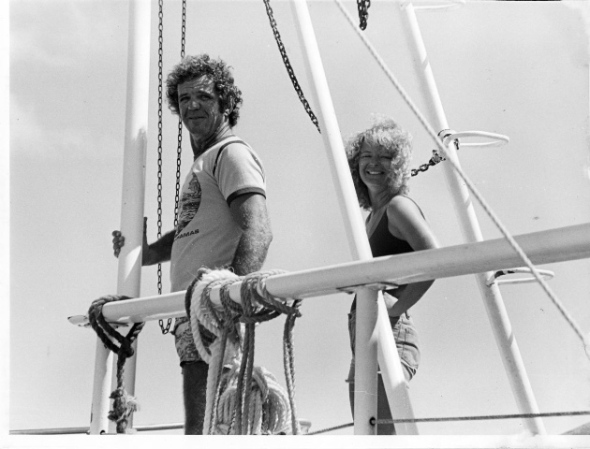 ‘The Mothership” – TSMV Petaj on the bay at Lizard Island.